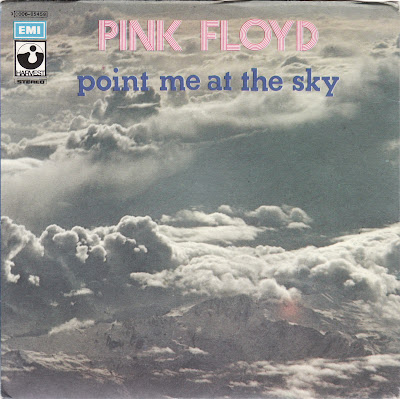 This is one of four Italian 7 inch singles reissues from 1978. The reason for the reissues is not clear and I haven't found any real answer for it. Some guessed that it was done to coincide with David Gilmour's new album and making some money when no Pink Floyd album or tour is happening. This single includes 2 songs: 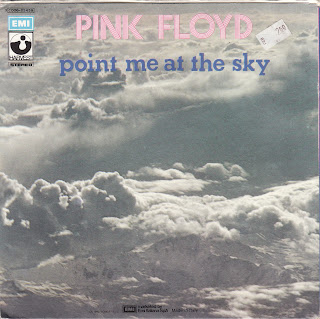 The first one is 'Point Me At The Sky', which was originally released in December 1968 as a single and wasn't included in any album.

The B-Side of the single includes 'Careful With That Axe, Eugene', an instrumental piece that was later could be found in the compilation album 'Relics', in the album 'Ummagumma' as a live version  and was recorded again for the soundtrack of the film 'Zabriskie Point' by the Italian director Michelangelo Antonioni. In the soundtrack it appeared with a different title as 'Come In Number 51'. 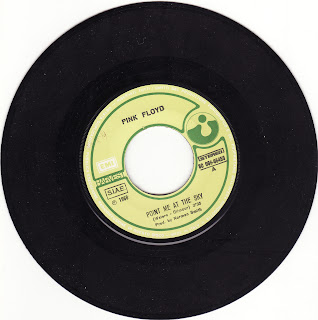 The single comes in a picture sleeve with the picture of clouds over snowy mountains on both sides of the single, and the words 'Pink Floyd - Point Me At The Sky' on top. 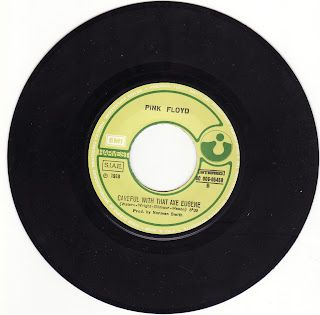 Email ThisBlogThis!Share to TwitterShare to FacebookShare to Pinterest
Labels: 1978, 7, Careful With That Axe Eugene, Italy, pink floyd, Point Me At The Sky, Reissue 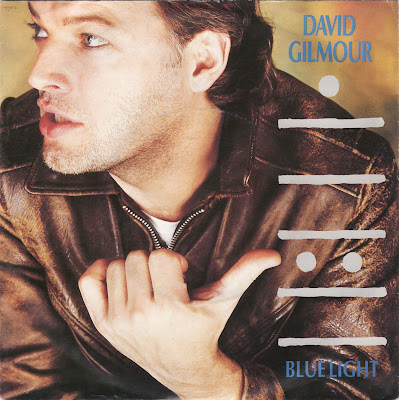 This is the single for David Gilmour's song 'Blue Light' from the 1984 album 'About Face'. This song was the first single from the album. The song here is the single edit and is a bit longer then the album version. It's the German issue of the single. The B-Side on this single is 'Cruise' 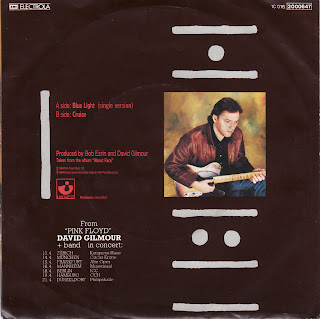 The single comes in a picture sleeve. The front cover is the same as the album and has Dave's name in the upper right corner and 'Blue Light' in the lower right corner. The back cover has a photo of David with his guitar, together with the track list, credits and 7 dates and venues from Dave's tour in Germany and Switzerland. 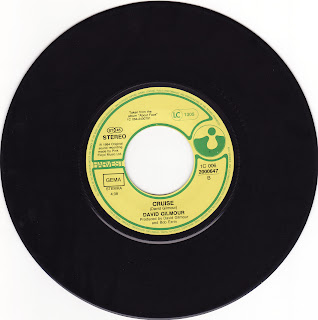 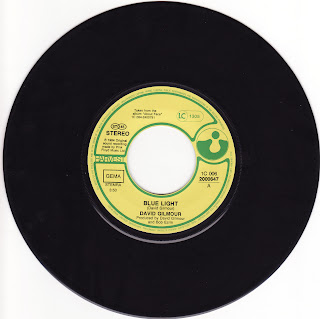 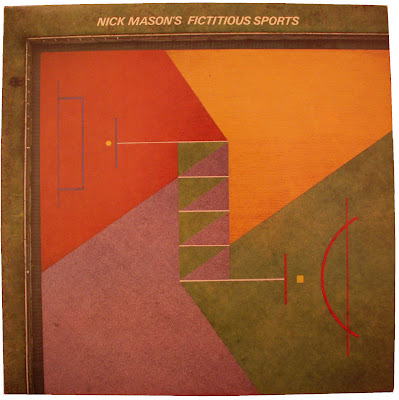 This is Nick mason's album from 1981, and another promo vinyl from my collection, released in the US. Like others, it has the golden stamp that says "FOR PROMOTION ONLY Ownership Reserved By CBS Sale Is Unlawful". The labels though, does not have anything that reminds us it is a promo copy, like others do. 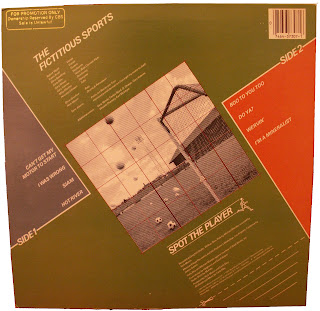 It is still not clear to me why it is credited as a Nick Mason album when clearly all he does in this album is playing the drums and percussion. Columbia, apparently attempting to cash in on Pink Floyd's explosion in popularity, released this album in 1981 under Nick Mason's name when in reality he's simply the drummer. He didn't write any of the lyrics or composed any of the music and obviously  is not singing. It is considered by many a Carla Bley album  in all but name, since she wrote and composed all the songs herself and co-produced. All the songs except one are sung by Soft Machine's lead singer Robert Wyatt. What can I say? It is still a Pink Floyd collectible for me and other Pink Floyd fans. 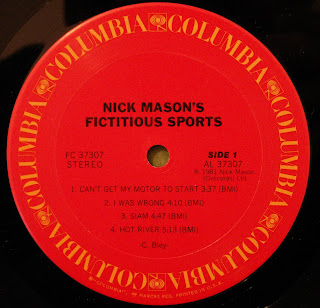 The cover was designed by long time Pink Floyd designers at Hipgnosis. The front cover has a fictitious sports' playing field.The back cover has a small photo in the middle of a soccer field and many balls on it, and includes song names and credits. It also comes with an insert with the song lyrics and pictures from the recording sessions. 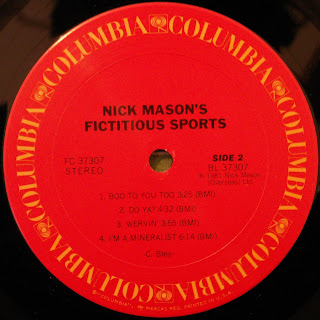 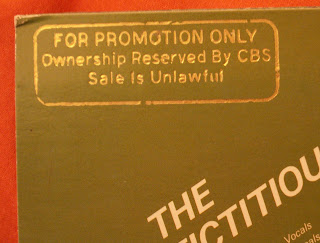 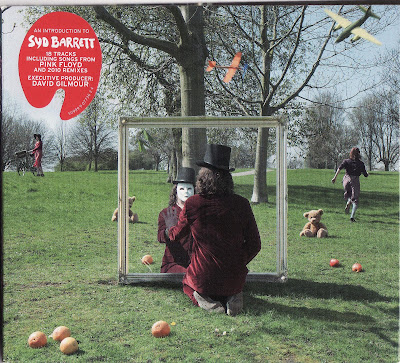 On October 4th, 2010, 'An Introduction to Syd Barrett' is released in the UK and Europe by EMI/Harvest Records. It is a brand new collection that will bring together for the first time the tracks of Pink Floyd and Syd Barrett on one compilation, spanning the period 1967-1970. 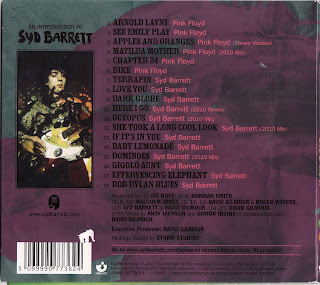 David Gilmour, who originally worked with Syd Barrett on the solo albums by co-producing 'The Madcap Laughs' and as producer of 'Barrett' has taken the role of executive producer for the album and has, along with Damon Iddins and Andy Jackson at Astoria Studios, remixed five tracks including 'Octopus', 'She Took A Long Cold Look' (now renamed... Cool Look), 'Dominoes' and 'Here I Go' on which David Gilmour has added and played bass guitar. Pink Floyd's 'Matilda Mother' also receives a fresh 2010 mix. Brand new artwork has been provided by Storm Thorgerson and his estimable studio. 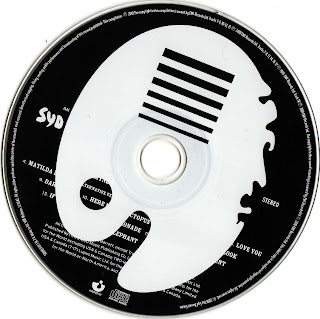 In terms of tracks selected, it is a nice mix of band stuff and solo material, and will indeed prove an interesting introduction to Barrett and his music for the newcomer. An addition to 'An Introduction To Syd Barrett' is the previously unreleased 20-minute instrumental 'Rhamadan', produced by former Pink Floyd and Syd co-manager Peter Jenner. It is to be offered as an extra downloadable track with the CD.

The CD is presented in a smart Digipack sleeve with the lyrics included in a 20-page booklet. It is the first time Barrett's lyrics are printed on official release. 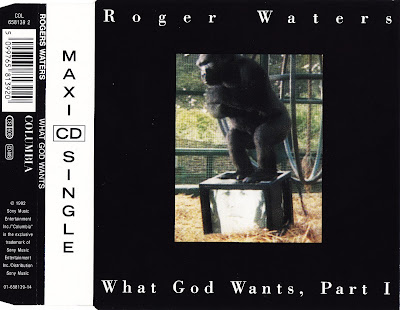 The front cover has the same photo as the 7 inch single - A monkey standing on a television. On top is Roger's name, and on bottom there is the single's name. It also has a white bar on the left side that says: MAXI CD SINGLE. The insert inside has the track list and credits together with a small photo of the front cover of the album (which is different from the single's cover). 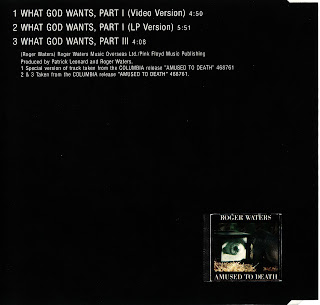 I think the main difference, or maybe the only difference, between the 2 versions of 'What God Wants Part I', is the intro which is much longer on the LP version. It has the women repeating the words: "What God wants, God gets, God help us all". 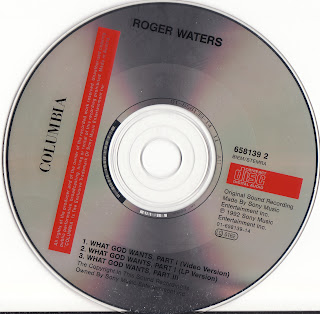 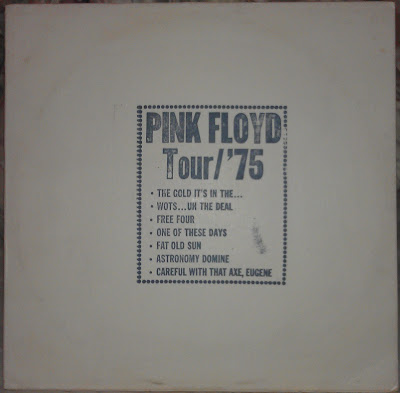 This is a re-post to a post written in the Hebrew language a very long time ago. One of the first few posts in this blog.

This LP is an official promotional sampler from the U.S.A. It is not a bootleg or a fake or rip off as uneducated guesses might suggest. As my friends from the Yeeshkul! community say, there might be two reasons for releasing this LP at that time in 1975:

(1) "I seem to recall this was done because CBS secured worldwide release rights to Pink Floyd after 'Dark Side Of The Moon'. EMI only had Europe left and so released 'A Nice Pair' and then followed up with 'Tour/'75' to keep radio play of EMI products".

(2) "From what I understand it was called 'Tour 75' because it was released during 1975 to coincide with the tour that year. As was mentioned before, it was strictly a promo deal and has nothing to do with live stuff. Sort of like the 'now that you have seen them live, here is a sampler from other albums they made' thing". 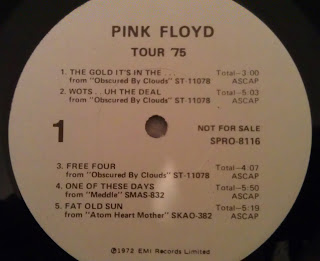 It has a white cover with Pink Floyd, Tour/75' and song titles stamped on it. 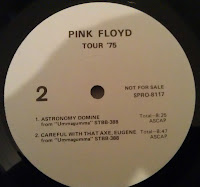 Last 2 songs are live versions taken from Ummagumma.
Posted by Gong at 6:01 PM No comments: 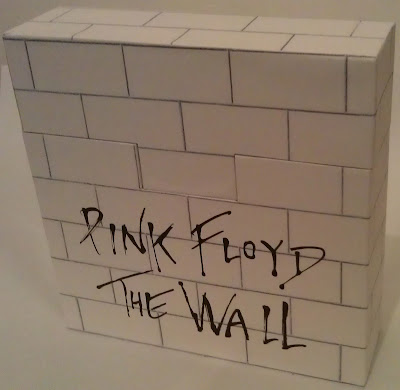 This is a special release for Record Store Day / Black Friday 2011. It's a box set containing 3 Pink Floyd 7 inch singles - Replicas of old singles from the album 'The Wall' with the original artwork from their initial release. It also includes a poster and a 7-inch single adapter.  The adapter is held in a small slit inside the box and has the famous hammers logo from 'Run Like Hell' single. Each box is individually numbered and mine is number '11651'.

The three singles are:
'Another Brick In The Wall (Part II) / 'One Of My Turns'
'Comfortably Numb / Hey You'
'Run Like Hell' / 'Don't Leave Me Now' 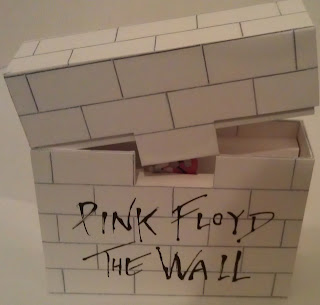 It is a very nice release and a good collectible for Pink Floyd collectors. There is a very nice trick when you open it and it looks like you are removing some bricks from the wall. The box itself has the cover art of 'The Wall' album. The official data from the Record Store Day website says there are only 7500 copies made for US and 4000 copies made for international distribute (11500 overall). Since my copy is numbered 11651 and was ordered from the US, and I also saw a copy numbered over 14000, I guess there are more copies made and some were reserved for certain stores and other sources.


Another Brick In The Wall (Part II) (3:13) / One Of My turns (3:37)
This single has a cardboard cover with Pink Floyd written on the front cover and song titles plus credits on the back cover. There is the original EMI labels & artwork from The Wall album. 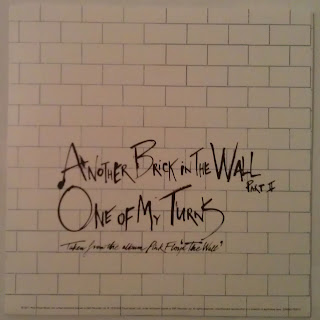 Comfortably Numb (3:59) / Hey You (4:40)
This one is also in a cardboard  cover with the original Japanese artwork. The front cover has the wall with some bricks missing, and through it you can see some figures from Gerald Scarfe artwork of album, including the famous hammers. The back cover has the song titles and credits and also features the lyrics of 'Comfortably Numb' in English and Japanese. the labels are orange EMI labels. In this single, the song 'Comfortably Numb' is shorter than the original album version which is 6:24 minutes. 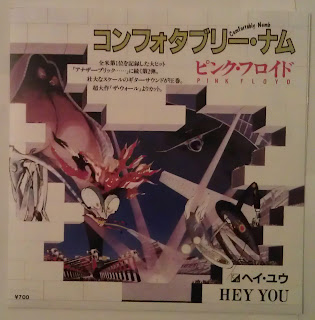 'Run Like Hell' (4:18) / 'Don't Leave Me Now' (4:02)
The front cover of this cardboard has Pink Floyd written on it at the top right corner, and in the middle there is the round hammers icon. The back cover has the song titles and credits. The labels are the original EMI labels with the artwork from The Wall album. 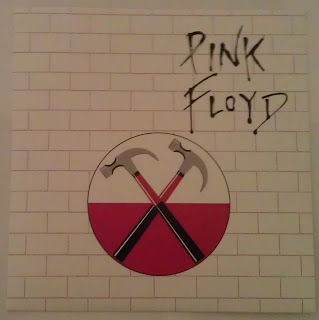 More photos of the box set can be found here: http://imageshack.us/g/39/wall3singles13.jpg/

Wish You Were Here MORE!

We are friends from Chile and Israel with a mutual interest in a band called Pink Floyd. It's been for years that we have this obsession for the band which is expressed in buying and collecting their music and memorabilia. This blog will present this collection for you to enjoy. If you want to contribute, sell, exchange, get me to make a small effort for you or just have a question to ask, you can contact me here: E-Mail me.